about life and wherever the wind takes us

Chapter 1: Raiders of the Lost City

August 28th. It was a hot summer day in Cartagena (not very surprising considering it is always summer in the Caribbean). Christiana Jones is getting ready for the quest of his life: Finding the Lost City. But even though he is the greatest adventourist of all time, he cannot do this job alone. He needs the help of someone who is not afraid of heights, who is not afraid of animals and who can stand the smell of a stinking, sweating Christiana Jones. There was only one person who was up for the job: Laura Croft. Together they packed their bags and took the Tombraider-mobile to Santa Marta.

August 29th 8.30 AM, the Lost City expedition sets out on what promises to be the most challenging and exciting excursion of their lifetime. Laura Croft and Christiana Jones leave the happy hippie community of ’The Dreamer Hostel’ behind and embark on their massive jungle-proof jeep, accompanied by the usual bunch of tank-top wearing, German backpacking archeologists and anthropologists. They never expected these very first hours would be the most sensational and life threatening moments of the entire trip: crossing Colombian traffic with a young, local, wacko driver. Believing that 2-lane roads should at least fit 3-4 jeep sized vehicles, that parking lots are meant for taking over busses from the right, and that turns in single, dirt-track mountain roads are meant for accelerating instead of braking, he brought the expedition team shaken but on time to the expedition assembly point.  El Mamey or ‘The Machete’ village was the end of civilization as they knew it and the start of their search for the long lost, mythical capital of the once almighty Tayrona people.

After a fishy lunch they started their trip. Laura Croft managed to obtain two magical, wooden sticks that would lighten the way and serve as insect killers (in the end, they did neither). The road was sandy, sunny, and uphill. The sweat was dripping of their faces like waterfalls down the mountains. Because they weren’t alone on their quest, they decided to get to know the other tomb raiders as well. Keep your friends close but keep your enemies closer they say. After three hours of walking and talking, they could wisely conclude that they were surrounded by a gang of German and French speaking discoverers and that they would have little help from them on their way to the Lost City.

Leading the rearguard of the 15 man strong expedition, Christiana arrived last at the first camp by nightfall. Obviously this had nothing to do with his own physical condition or the 100kg backpack he was carrying (including Laura Crofts make-up, pedicure/manicure set and entire jungle wardrobe), it was merely his cunning strategy to avoid having to cut down trees and build a camp site. When he arrived at the campsite he found an entire village erected, including bunk beds, pool tables and toilets in an idyllic river valley. Time for some well-deserved rest! 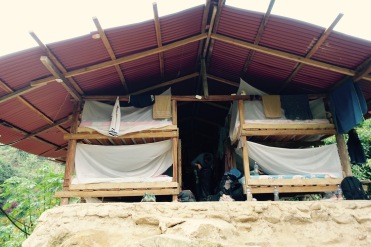 Once installed at the camp, they discovered a natural waterfall/swimming pool that could only be entered by jumping off high rocks. Christiana Jones, heroic as he is, took the jump, ignoring his fear of heights, so he could finally wash off the stinking sweat of his body and clothes. As for Laura Croft, she gracefully triple-back-flipped her way into the water and enjoyed its ice-cold refreshment. After a fine dinner, prepared by their private, local cook, they hit the bed by 8PM, exhausted after a 3h hike, not knowing if they would ever make it back alive..

I am passionate about writing, connection (not wifi, the human one), discovering life in all its glory, and dancing my ass off to Champeta beats. Read more